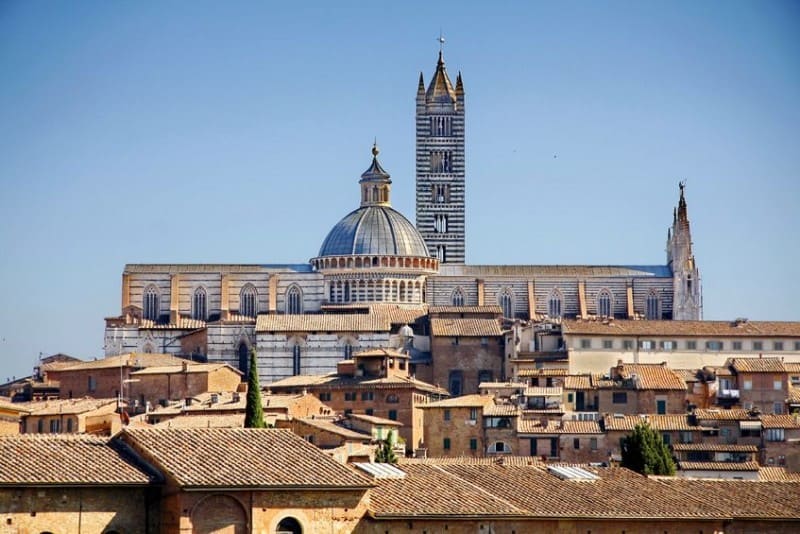 The Beauty of Siena, a Travel Guide!

On the way back from Maremma, before heading on to Florence, we decided to stop in Siena and pass there the whole day. I’ve visited Siena many times, but all the times it happens I’m in its surroundings, I cannot resist to visit it again and again.  I think Siena is probably the most beautiful art city in Tuscany, at least it is my favorite Tuscan town 🙂

Siena is so different from Florence, yet so equally charming and attractive, with its unmistakable cityscape and the red-brick colour covering all its historic buildings and monuments. 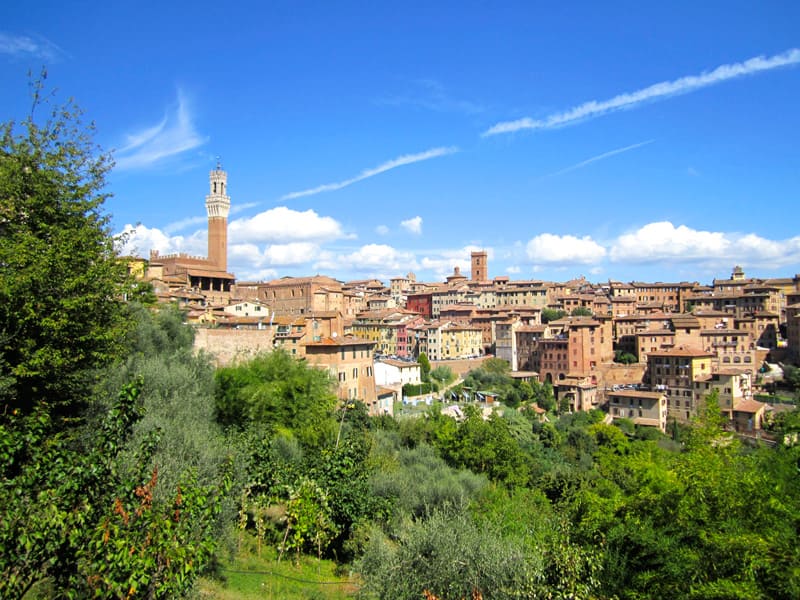 The very heart of Siena is Piazza del Campo, also simply called Il Campo; all the main streets of the city, like Banchi di Sopra and Banchi di Sotto, lead to it, and this vast and unique shell-shape or diamond-shape medieval piazza is the natural meeting point for tourists, visitors and residents alike.

All enclosing Piazza del Campo many beautiful and spectacular buildings, monuments and sumptuous palaces, like the Palazzo Pubblico (the city’s Townhall) dominated by the amazing Torre del Mangia, an incredibly tall (97 mt) and slender bell tower, from which, after climbing 503 steep steps, you get wonderful panoramic views across the city and its splendid countryside.  Right at the base of the bell tower, you can admire a beautiful stone loggia, the Cappella di Piazza, that was built after the Black Death in 1348.

The Palazzo Pubblico hosts the notable Museo Civico, where you can admire beautiful artworks by Ambrogio Lorenzetti, Bernardo Rossellino, Taddeo di Bartolo, Simone Martini, and Sodoma.
On the highest level of Piazza del Campo, opposite the townhall, stands the wonderful Fonte Gaia, fountain realized by Jacopo della Quercia in the 15th century.

The Spectacular Palio of Siena

Since its realization, the Campo was the focus of city life: marketplace, scene for matches and executions, festivities, and, above all, the unique scene for the famous Palio of Siena, the most famous and loved event taking place in Italy. This traditional folkloristic horse race probably derives from an ancient Etruscan game.
No other Italian festival has such a heady combination of drama, tradition, and sheer spectacle. This heady and exhilarating horse race takes place in Piazza del Campo twice a year, on the 2nd of July and the 16th of August.

Leaving Piazza del Campo and taking a stroll nearby you can discover many other treasures. Not far, you can visit the wonderful Duomo of Siena, a masterpiece in a pure gothic style that was built between 1136 and 1382.
Worth mentioning is also Palazzo Piccolomini, the most imposing building of Siena, with frescoes by Pinturicchio. You also cannot miss visiting the wonderful and elegant Palazzo Chigi Saracini, home to the prestigious Accademia Musicale Chigiana. This ancient palace in gothic style dates back to the 12th century and occasionally opens its doors to the public; here you can visit splendid rooms, the Musical Instrument Museum and a beautiful art collection displaying notable works by important Italian artists (Botticelli for instance), especially of the Sienese school. Click here for more information to visit Palazzo Chigi Saracini.

Of course there are so many museums and things to visit in Siena, that I surely will dedicate some more posts to this amazing Tuscan town.

A final note dedicated to Tuscan cooking and Siena’s tasty typical products:
Siena is famous for its delicious ricciarelli, delicacies made of marzipan and vanilla, panforte, another cake made of candied fruits, cavallucci, nut and spice biscuits, and the pici, a kind of pasta typical of this part of Tuscany.

While strolling through the steep and narrow streets of Siena, breathing its unique atmosphere, your attention will also be captured by the many shops selling these typical local products, together with many other local specialities, like the superb wines coming from Chianti and Val d’Orcia vineyards, for which Siena is famous all over the world.

You can find my tips on where to sleep in Siena by having a look at these charming hotels and accommodations in Siena, while there’s a full article dedicate to Siena’s Top Attractions and Main Sights. Siena is a perfect home base to start exploring the main attractions of Tuscany!

The Top Day Trips from Siena