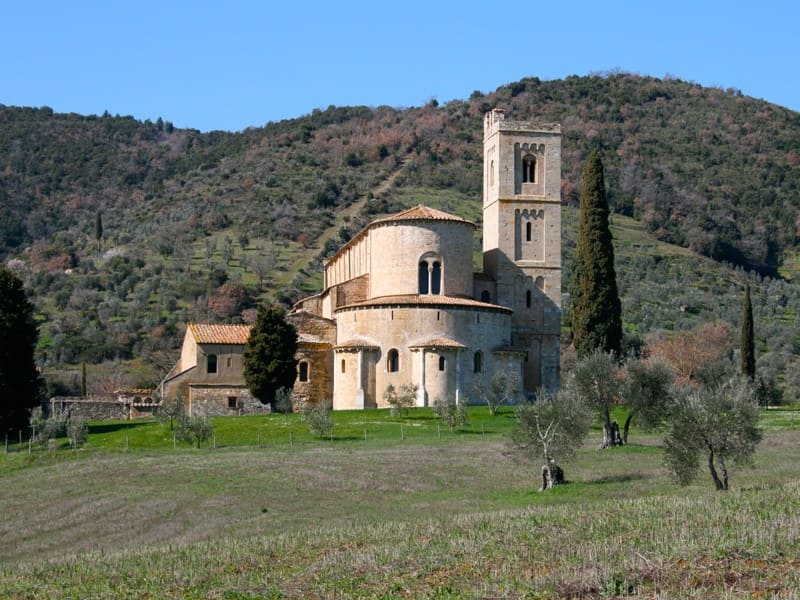 The Mystic Abbey of Sant’Antimo in Montalcino

The Val d’Orcia, south of Siena, is one of the most beautiful and suggestive areas of all Tuscany and Italy as well.
A trip to Tuscany would be incomplete without a visit to this magical land, where art and nature are absolute protagonists: countless undulating green hills and fields of grain running one after the other, winding country roads lined by scenic cypress trees, isolated country houses and abbeys, medieval castles and fortifications, fairytale hill top towns and wonderful hamlets…

If you happen to come to the Valdorcia, then I highly recommend you visit what is one of the most impressive and evocative places in Tuscany: the Abbey of Sant’Antimo in Montalcino, that, together with San Galgano and Monte Oliveto Maggiore, is one of the most beautiful abbeys in the region.

Located ten minutes south of Montalcino (the perfect Tuscan medieval hill town, renowned throughout the world as the home of the precious Brunello di Montalcino wine), along an incredibly scenic Tuscan road, San’Antimo is a large Romanesque abbey built in the 12th century, beautifully set amongst ancient olive trees and vineyards; with the nice medieval village of Castelnuovo dell’Abate rising on the hill nearby.
This wonderful Benedictine monastery stands isolated on a green plain dotted with daisies and dominated by secular olive groves; its travertine stones shine with golden colours under the sun. That’s truly a spectacular view, and indeed one of the most photographed places in Tuscany.

Antimo is the name of the priest put to prison under the Roman emperors Diocleziano and Massimiano, and finally beheaded in the year 304 AD.
According to the legend, the Abbey of Sant’ Antimo was founded by Charlemagne on his way back from Rome, while he was proceeding along the ancient Via Francigena, in the distant year 781 AD.
While returning from Rome, his army was afflicted by a horrible pestilence, and Charlemagne stopped here to pray God to save his soldiers; an angel appeared telling him to look for a local herb and give it to his men to cure the disease. The herb did work and Charlemagne built the abbey to thank God of the miracle.

During the 11th century, due to the close vicinity with the Via Francigena, the abbey found itself inserted into the system of the great pilgrimage itineraries, becoming one of the most powerful monastic foundations in all of Tuscany. Later on, already in 1163, the precarious economic situation marked the gradual decline of the monastery, that was finally suppressed by Pope Pius II in 1462.

After more than five hundreds years, today, the abbey is maintained by French monks, that celebrate mass with wonderful Gregorian chants.
This a very special abbey with a unique suggestive and mystic atmosphere. It’s impossible to not be touched by this magical place, even if you are not a believer, especially when you enter the abbey: a great silence, feeble lights entering from the small mullioned windows, beautiful frescoes in the Carolingian chapel, an ancient dark crypt, and monks in whites robes singing beautiful Gregorian chants.

I love this place, I’ve visited it really many times.
Have a look at my photos of the abbey to know what I mean 🙂