Sorano and Sovana represent two medieval gems, hidden amid the rich vegetation and magnificent green hills of the Maremma area in southern Tuscany.

Their origins go very far back in time and their atmosphere is timeless and incredibly suggestive.

Together with Pitigliano, these extraordinary Italian hill-top towns, are known as città del tufo, as they rise from spectacular outcrops of tuff stones, rocks of volcanic origin. Incredibly carved into the tuff, are little caves that were once inhabited by ancient civilizations and are still used today to store things.

Sorano and the Subterraneans of Orsini’s Fortress

Northwest of Pitigliano is the wonderful village of Sorano, visible for miles from any part you approach it. If you are arriving from south you’ll find the road spectacularly lined with Etruscan tombs and caves carved into the hillside, while the western route is characterized by spectacular walls of tuff.

This intriguing ancient village is partly abandoned, with just some of the older houses lived in.

The beautiful and characteristic tangled alleys and medieval corners contribute to its suspended and suggestive atmosphere. An incredible place beyond time!

What is most striking is that all the houses and buildings stay side by side, one after the other, and confuse themselves with the underlying rocks.

Fortezza Orsini, old castle and imposing fortress, dominates Sorano’s town center, and is home to the lovely Hotel della Fortezza, fine 3 star hotel to be recommended for a unique stay! The hotel is located within the Cittadella della Fortezza, in its older part; you enter it after crossing the drawbridge. The rooms are elegantly furnished with antiques and enjoy wonderful views. 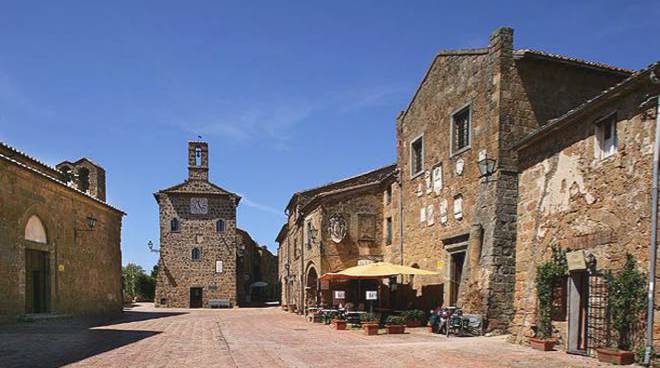 Sovana’s origins date back to at least the 7th century BC, with the Etruscans that took their residence here; then was the turn of the Romans, then of the Longobards, and finally of the Aldobrandeschi noble and powerful family.

Via di Mezzo, Sovana’s main street, is simply enchanting, with its beautiful brick paving built by the Medici in the 16th century. At the end of the street you find Piazza del Pretorio, beautiful medieval square dominated by the church of Santa Maria Maggiore, featuring stunning frescoes.

Palazzo Pretorio, that dates back to the 13th century, is home to a small museum dedicated to the history of the place, particularly to Etruscan tombs and the necropolis.

The Duomo’s exterior wall and splendid lateral portal are adorned by fabulous carvings. The interior is characterized by 12th century capitals with beautiful carvings recalling the work of the Benedictine monks in the Abbey of Sant’ Antimo. You can see traces of ancient frescoes and a beautiful crypt.

Have you ever heard about the ancient treasure of Sovana? Precious gold coins were accidentally discovered here!

Where to stay in Sovana

If you’re wondering about a special place to stay in Sovana, that can be great to discover all the area, from Sovana and Sorano to the wonderful Pitigliano, I recommend the Sovana Hotel & Resort, very charming 4 star hotel immersed in a beautiful park with swimming pool. The rooms are very elegant and equipped with any comfort; the views over the surrounding countryside and Sovana are lovely.

Sorano and Sovana are all surrounded by impressive green valleys, crossed by clear rivers, where you’ll find many Etruscan archaeological sites and a lot of impressive Etruscan tombs, often characterized by beautiful carvings.

Many tombs date back to the 7th century and the necropolis as a whole extends for miles, throughout the all territory up to the border with the Lazio region.

Particularly amazing and spectacular are the so called Vie Cave, intricate network of Etruscan roads, deeply carved into the rock and characterized by steep cliffs of tuff, sometimes higher more than 20 meters! Explore these ancient suggestive routes while being surrounded by a spectacular nature!

Do some trekking and walk across these ancient and suggestive routes! Walking here is a real experience!

This wonderful part of the Maremma region is ideal to make a lot of outdoor activities, like trekking and cycling. The area is also rich in ancient thermal springs like the ones in Sorano.

You can relax and enjoy the beneficial properties of these extraordinary hot waters at the Residence and Spa Terme di Sorano, located amidst a wonderful and unspoilt nature and featuring beautiful thermal pools with waterfalls.

Sorano, Sovana, and Pitigliano are amongst the most extraordinary hill towns of Italy, and should be visited at least once! 🙂