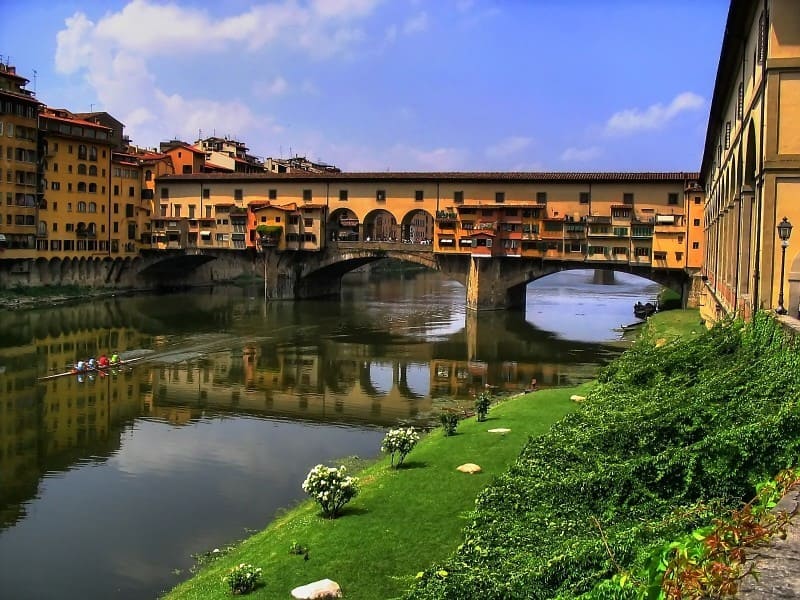 The Oldest Bridge of Florence

The beautiful Ponte Vecchio or Old Bridge in Florence is one of the most famous and recognizable sights of this marvellous art town of Tuscany.

That’s the oldest bridge in all Florence and is made extraordinarily unique thanks to the picturesque views one can enjoy while crossing it, the beautiful Vasari Corridor connecting the Uffizi Gallery to Palazzo Pitti, and the beautiful goldsmiths’ workshops, with unique and refined handmade jewels, like the typical filigree creations.

The Ponte Vecchio rises on the narrowest part of the Arno river. It seems that already the Etruscans had built a bridge to cross the river. The first construction in wood dates back to 972. Despite some damage, the Old Bridge has incredibly survived the bombing of the Nazis in 1944 and the great flood of the Arno on the 4th November 1966.

The jewellers’ shops that line its span once housed butchers’ shops and groceries, garbage used to be thrown into the Arno river; actually the smell on the bridge would not have been so nice. The same happened in London during the Middle Ages; on the Tower Bridge butchers threw meat scraps directly on the road or in the river Thames. The Middle Ages were indeed characterized by terrible sanitary conditions.

On occasion of the wedding between Francesco dè Medici and Giovanna of Austria in 1565, the meat market was moved from the Ponte Vecchio, right to avoid the bad smell at the passage of the grand duke, and the goldsmiths’ shops took its place.
In the same year and for the same occasion, the Vasari Corridor was built by the artist and architect Giorgio Vasari for the Grand Duke of Tuscany, Cosimo I Medici, father of Francesco. The Vasari Corridor, one kilometer long, is an aerial passageway linking the Tuscan government offices in the Palazzo Vecchio, to Palazzo Pitti, the Medici’s home.

Apart from allowing the Medici to move freely without having to mix with ordinary people, the corridor was also a symbol of the Medici’s power. Part of the Vasari Corridor collection of paintings contains a large assortment of self portraits, with pictures donated by artists such as Hogarth, Rembrandt, and Rubens. From small portholes and windows of the corridor you will enjoy incomparable views over Florence and the river Arno.