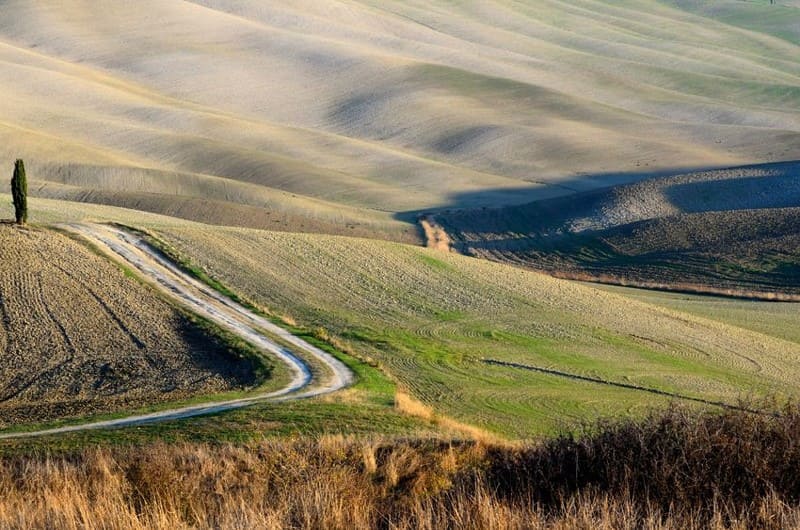 The term Crete Senesi refers to a vast area of Tuscany on the border between the provinces of Arezzo and Siena, which extends almost up to the slopes of Mount Amiata.

Here is a unique picturesque scenery…a spectacular sea of undulating rolling hills like no other in Tuscany.

That’s an incredibly suggestive and characteristic scenery, almost an unreal “lunar landscape”, with barren gentle hills and woods running across villages, solitary cypress and oak trees, abandoned farmhouses here and there, beautiful forests on the plains.

The word crete refers to the clay in the soil, which gives the land its distinctive blue-gray color. This particular clay, mixed with rock salt and gypsum, said mattaione in Italian, is what remains of the sediments of the sea that was ​​swaying here millions and millions of years ago!

The landscape of the Desert of Accona, a semi-arid territory, is stunning, here, the particular clayish conformations of the area, like the biancane and the calanchi, occur with more frequency.

This wonderful characteristic territory is located south of Siena and north of the Val d’Orcia. The Crete are far from the usual tourist trail, I suggest you visit them 🙂

Here follows a list of the lovely hill towns of the Crete together with the main sights and attractions not to be missed in the area!

One of the most impressive, imposing and beautiful abbeys in Italy, the Abbey of Monte Oliveto Maggiore is the main attraction of the Crete. The abbey stands isolated on a hill, all covered with cypress trees, in a picturesque location near Asciano, right in the middle of the Desert of Accona, and is surrounded by the rugged landscape of the Crete steep ravines.

The abbey is a great monastic complex and is still active; it contains many works of art and a library with many valuable ancient books and parchments. The great cloister houses a series of beautiful 16th century frescoes by Luca Signorelli and Sodoma, depicting the story of Saint Benedict; the works are considered one of the greatest examples of Italian Renaissance painting.

The abbey is so incredible that I will dedicate a full post to it very soon 🙂 I’ve visited it twice!

Asciano is a lovely medieval village, that can be approached from Siena through a wonderful scenic road. Domenico di Bartolo is the most famous personality of Asciano; great painter of the 15th century, Bartolo is the author of the beautiful fresco cycle that you can admire at the Museum of Santa Maria della Scala in Siena. The Museo Civico Archeologico e d’Arte Sacra of Asciano displays amazing Sienese paintings from Ambrogio Lorenzetti and Taddeo Bartolo, amongst others.

Buonconvento is a characteristic medieval walled village with bastions and a lovely town hall. Like in Siena, the red color of the brick is predominant. Its mighty walls are well preserved and you can still see the doors and the seven towers of its defensive structure. If you leave the main street of the village you’ll find yourself immersed in a network of characteristic alleys; it’s a pleasure to walk here.

The Museo della Mezzadria in Buonconvento, is an interesting museum devoted to the rural and social history of the territory.

Enchanting hill top town, San Giovanni d’Asso, has a lot of beautiful ancient churches, like San Pietro, lovely Romanesque church of the 11th century. The village is dominated by a beautiful imposing castle and fortress with frescoes, that houses the Museo del Tartufo, museum dedicated to the white truffle, famous precious tuber of Italy, also typical of this part of Tuscany.

Rapolano Terme is an important and appreciated thermal destination in Tuscany. Its thermal springs go very far back in time, they were used by the Etruscans and the Romans. West of Rapolano, in fact, there’s an archeological site from the third century BC, that covers an area larger than 8,000 square meters, which over the years has been the subject of some excavations that have allowed to reconstruct much of the layout of the ancient building.

Today you can enjoy these fantastic waters at the Terme di San Giovanni, beautiful thermal complex with a refined hotel and spa, enchanting thermal swimming pools and a lot of services.

On a hill facing Rapolano, raises the beautiful fortified castle of Modanella, today an agriturismo offering accommodation in apartments. Nearby you’ll find many beautiful little villages and other wonderful castles, like the castles of Poggio Santa Cecilia, San Gimignanello and Gallico.

The White Truffle of the Crete

The area is known also for the exquisite white truffle of the Crete, the so-called “diamond” of the Crete.

There’s a whole museum dedicated to the truffle in San Giovanni d’Asso, where, once a year in November, takes place the Mostra Mercato del Tartufo Bianco delle Crete Senesi, a festival focused on this rare and precious local product.

For a great stay in the heart of the Crete Senesi, I suggest Villa Armena, luxury relais and beauty farm in Buonconvento.

Just have a look at the photos of the Crete Senesi in the gallery to understand how special, uncommon and exceptional is this part of Tuscany! 🙂